The two most common terms used in relation to carbon projects are additionality and permanence. Often mentioned in the same breath as carbon credit quality – or thrown about when talking about how to avoid greenwashing – they are key terms to understand for any landowner or credit buyer involved in the voluntary carbon markets. So let’s break it down, starting with permanence.

In short, permanence is a concept encapsulating how long carbon is tied up for, and what its risk of reversal (i.e. being re-released into the atmosphere) is. Reversal can occur in many ways. In forestry-related carbon projects, the most likely causes for reversal are fire, decomposition, and harvest followed by timber use in short-lifecycle products (such as paper).

Let’s use the example of an average tree to explore permanence. If you plant a small Norwegian Pine sapling this spring, it will (if all goes well) continue to grow for many decades, pulling CO2 out of the air to convert into biomass. It will store carbon in its trunk, branches, needles, and roots.

Some of that storage is long-term – such as the trunk, which will last throughout the tree’s lifecycle (50+ years) and even beyond, if the timber gets made into furniture or built into a house.

Some is short-term – pine needles may fall to the ground and decompose within less than a year of growing, re-releasing CO2 back into the atmosphere.

So what is the overall permanence of carbon storage in the pine tree? Hard to tell, but as a simple rule of thumb, methodologies used by verifiers like Verra often assume that about half the tree’s total biomass is stored for the full duration of its growth cycle and then harvested. So if our hypothetical pine goes on to grow for 80 years and store a total of 1.5 tonnes of CO2, we could count this as 0.75 tCO2e with permanence of 80 years.

How does permanence vary between different types of carbon projects?

In general, afforestation projects have an estimated permanence of 30-80 years. This permanence is calculated mostly based on contract length rather than the potential lifetime of the trees - because for most newly planted forests, the biggest impact on their longevity relates to harvest cycles, rather than a tree’s natural life cycle. Therefore afforestation projects enforce permanence through contracts which require the landowner to keep their forest growing for some specific period.

Zooming out to look at a broader list of carbon credit types, we see that permanence varies widely between different projects. Projects involving mineralisation (turning CO2 into carbonate and similar minerals) have some of the longest storage durations – in fact, the carbon tied up in this way may well be tied up for ever.

At the other end of the scale, soil carbon projects are generally estimated to have lower permanence, as the risk of reversal is very high. 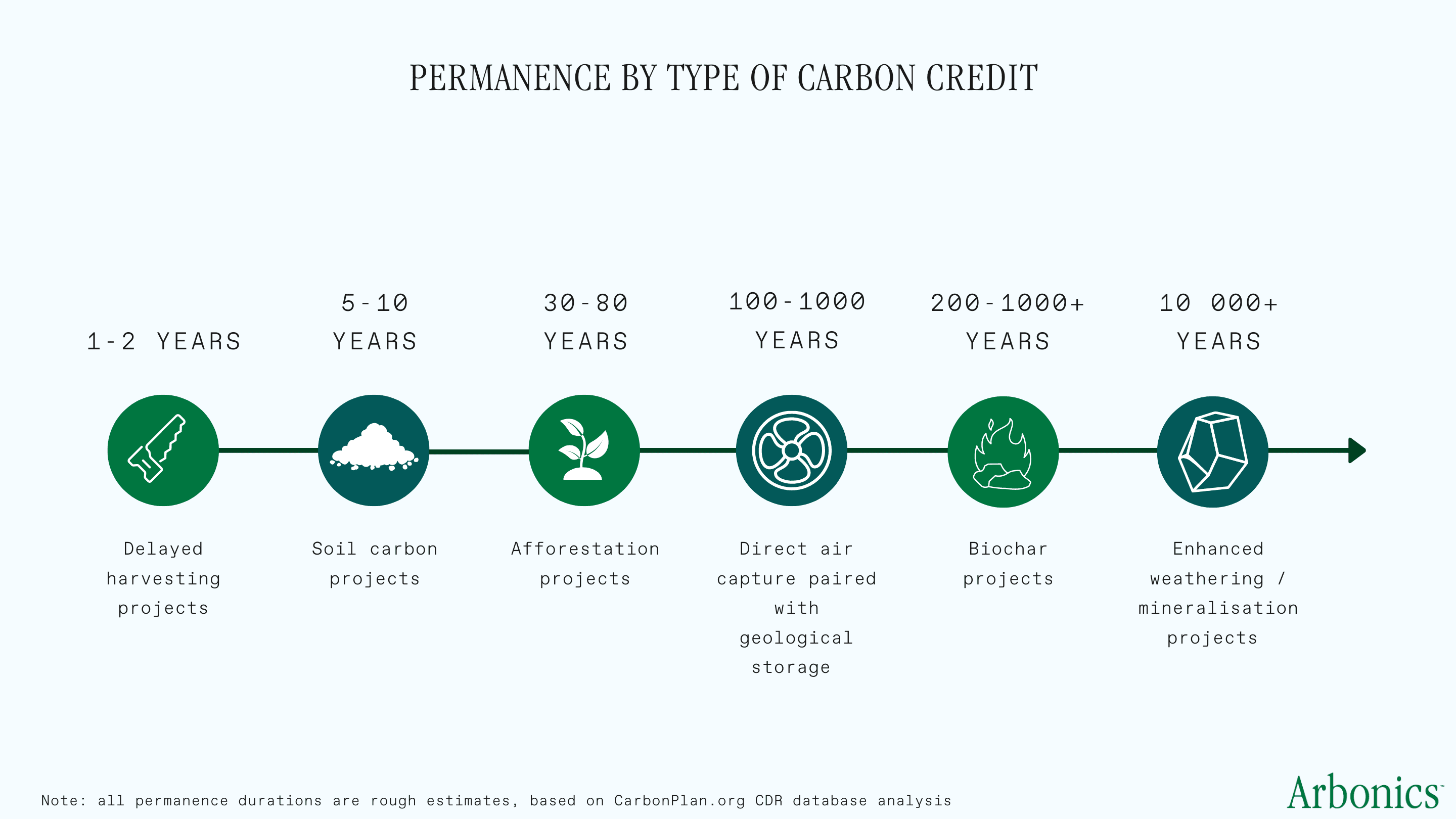 Why does permanence matter?

At its core, permanence is important because of the duration of CO2 in Earth’s atmosphere. Once additional CO2 is released through any means, the clock starts: some 60-80% of the released CO2 is absorbed (mostly into oceans) in the first 200 years. The remaining 20-40%, however, will stick around for a long time - from 300 years to upwards of a 1000 years. Note that this doesn’t mean that an individual CO2 molecule stays around that long (they have an average life of 5 years), but rather that the extra CO2 released creates, essentially, a surplus, which takes a while to be absorbed through the carbon cycle.

Think about it a bit like flooding in city streets after heavy rain: an individual molecule of H20 is easily absorbed by drains, but if a lot of them are released at once, it will take a while for the extra water to drain away through normal means (and if the rain is particularly heavy or the area low, we might need to use pumps to get rid of surplus water).

This is why we need to consider permanence if we want to sequester CO2 for the purpose of offsetting our overall emissions. If our methods have on average low permanence (<50 years), we are not adequately offsetting the CO2 released, because at the end of the sequestration period, we will have nearly double the amount of CO2 in the atmosphere – whatever we sequestered and released, plus most of the initial CO2 that we were offsetting in the first place and which has yet to be absorbed.

Doesn’t that mean we should focus only on very long-term storage, 1000+ years?

Yes and no. In an ideal world, all carbon offsetting would be done via very long-term storage solutions, such as direct air capture (DAC) with geological storage, or enhanced weathering (also known as mineralisation). However, the total global annual capacity for these options is currently in the low five digits of tonnes of CO2. As of 2021, all the global DAC plants in operation jointly sequestered less than 10 000 tonnes of CO2 annually, and they did so at an average cost of about €500-1000/tCO2e.

In contrast, to tackle our current and historical emissions, we will need to remove around 10 gigatonnes (that’s 1 billion, or 1 000 000 000, tonnes) of CO2, annually, by around mid-21st century. It’s clear that DAC and mineralisation alone will not be enough.

Nature-based solutions (of which forest-based carbon is one) can fill the gap. While they have lower permanence, they are scalable, more affordable, and provide a host of co-benefits such as habitat protection, water purification, timber and other goods, etc. When paired with sufficient safe-guards to ensure permanence is maximised (e.g. via contracts disincentivising the premature harvesting of newly planted forests), forest carbon projects can be an effective way to reduce atmospheric carbon while protecting nature.

Arbonics is a tech-based carbon and ecosystem platform for forest-and landowners in Europe – bridging the analogue world of forestry with the world of tech to fight climate change. We partner with landowners to access new revenue streams by helping them quantify, monitor and sell the environmental benefits of sustainable land management.

Are you a landowner? Introduce yourself here and we will get in touch to discuss opportunities with your land.

What are REDD+ carbon credits, and why have they been receiving criticism?

Back to basics - what carbon credits really are and how to know if they are high quality.